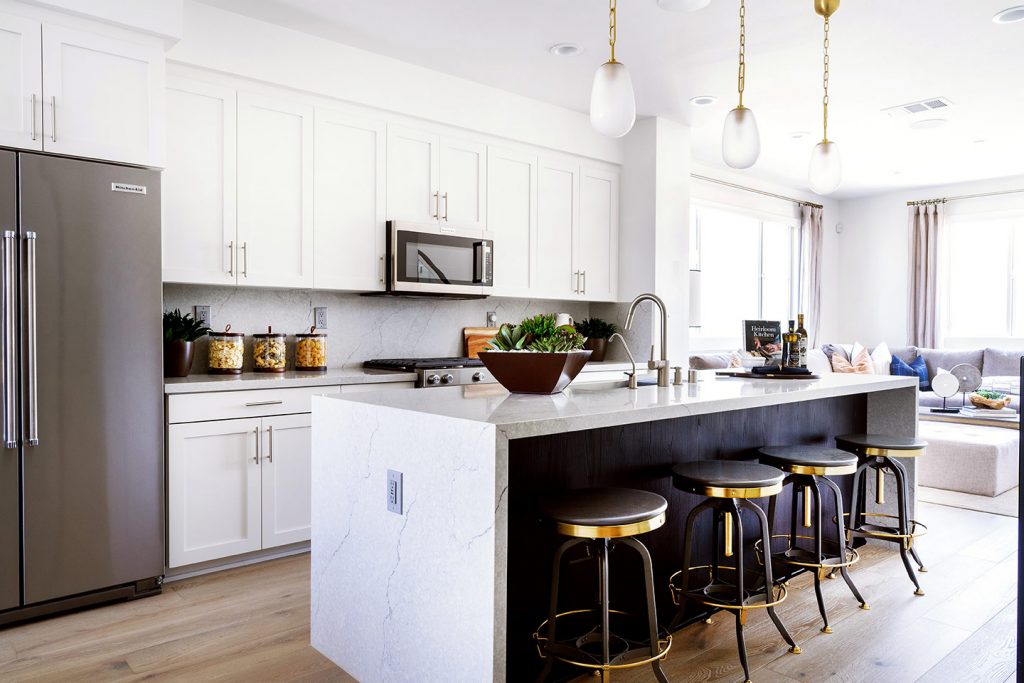 A discussion with The Olson Company President + CEO Scott Laurie

“We provide the type of floor plan that they (Millennials) want to purchase but we continue to learn from them and learn from technology.”
–Scott Laurie, President + CEO, The Olson Company

Over the last three decades, Seal Beach based developer, The Olson Company has produced more than 11,500 for sale residential units in the urban areas of more than 100 cities, most of which are located in Southern California.

“I think what really separates us from our competition is that we are true infill developers and we do our best to enhance neighborhoods within existing, mature communities,” Scott Laurie, President and Chief Executive Officer of Olson, said. “What we’re doing is coming in and developing overlooked parcels, or re-entitling or rezoning sites to add value to existing neighborhoods and to be part of that fabric.”

Ranging between the high $300,000s to the high $700,000s, Laurie said the homes may not seem affordable to some when compared to other parts of the United States and California. However, with the company’s primary markets being the San Gabriel Valley, North Orange County and the South Bay, he explained that this price range is on the more affordable end of the spectrum.

According to Laurie, Olson tries to focus development in cities where jobs are being created, which generates a higher demand for housing. He explained that many of these cities have not seen significant amounts of new residential for sale construction in years, sometimes decades.

Diversity in their housing communities is important to the company, Laurie said, citing the fact that project size varies greatly–ranging anywhere from 15 to 120 units per development.

“There are a lot of overlooked parcels in urban markets and every single one is different. They have diverse challenges that provide significant opportunities and require very different solutions,” Laurie said. “That’s part of the diversity and that is the expertise of this company–we are able to develop solutions and we create tremendous value to the cities that we build in and to the existing neighborhoods. Every project is different.”

Most of the communities built by Olson do not require major infrastructure, according to Laurie. He said that, because the company focuses on infill projects, infrastructure is primarily in place, which also allows the company to keep construction costs moderate. In addition to infrastructure, Laurie said already existing retail, parks and transit are crucial to the walkability and lifestyle for the company’s target resident.

Nearly all of Olson’s development names include the word “walk,” such as Tapestry Walk in Anaheim. Laurie said the idea behind the company’s developments is for residents to be able to exit their front doors and be within walking distance to restaurants, entertainment, schools and even work. He explained that this community engagement and integration is just as important to Olson as the physical homes they build.

Laurie said Olson currently has around 30 projects of various scales in Southern California that are either being entitled, developed or under construction. Several upcoming deals are in the city of Los Angeles. He explained that the projects would be very urban in nature, which is forcing Olson to start taking a closer look at parking needs when it comes to density in transit-oriented areas as transit demands evolve.

The developer has some new designs in the works that relate more to the company’s largest buyer demographic–Millennials. He said that with the oldest Millennials entering their late 30s, many are buying homes and starting families.

“We provide the type of floor plan that they want to purchase but we continue to learn from them and learn from technology. People live a very fast-paced life today and there’s a lot of activity that goes on,” Laurie said. “What we found from our buyers, one thing they all have in common, is that they like to entertain and they like to spend time with their friends and families.”

Laurie explained that, aside from wanting to be within walking distance of community amenities, the Olson demographic of homebuyers does not want to spend nights and weekends caring for a 2,800 square foot detached home on a 7,000 square foot lot–gardening, repairs and other home maintenance. Instead, younger buyers would rather own a 1,500 square foot townhome they could enjoy, while a low homeowners association fee covers landscaping, exterior paint and some other property maintenance costs.

As California continues to be a leader when it comes to environmental issues, including energy efficiency and green technology, Olson works to fall in line with the state’s future goals. Laurie explained that a majority of the company’s communities have been certified Leadership in Energy and Environmental Design, more commonly known LEED certification.

As part of its environmentally conscious developments, Laurie said Olson includes features such as low-flush toilets, tankless water heaters and LED lighting, to name a few. In addition, by building within walkable communities and near transit, Olson is getting more people out of their cars, which has positive effects for the environment in terms of air quality.

“We need to think about the future and how people are going to live in their homes and how that is going to change,” Laurie said. “We are looking at some smaller units to drive affordability. It’s something that is becoming more and more important as the current real estate cycle evolves.”

With housing prices in California already high and continuing to rise, Laurie noted that buyers are not the only group feeling the pressure. He explained that developing in California, due in large part to stringent environmental standards, has become far more expensive compared to other states. Because of this, Laurie said compromises must be made between developers, cities and homebuyers so affordable housing can continue to be built throughout the state in highly desirable areas.

“We are extremely focused from the beginning on finding the land, all the way through our buildout and for our homeowners,” Laurie said. “Nothing is more important to us than homeowner satisfaction, which is why we are number one in North America from Eliant–a nationally recognized third party survey firm in the homebuilding industry–for overall purchase experience. We take that very, very seriously.”

To live up to the company’s “customer comes first” mantra, Laurie explained that Olson remains active on its communities for 10 years through its Champion Program, which allows for a continued presence to ensure and maintain the level of excellence the company takes pride in.

Laurie said there are not many companies that have been operating for nearly 30 years working specifically with infill projects. That experience is what differentiates Olson from its competitors. He explained that the company has remained disciplined to the niche and learned from previous community developments and continues to evolve as buyer’s preferences change and technology becomes more prudent.

Many Olson employees have been with the company for more than 10 years, according to Laurie. He said this consistency and the disciplined nature with which the company continues to refine its vision, while maintaining its core beliefs, is what keeps The Olson Company ahead of other developers.

“We’re always focused on getting better at what we do and it starts with the fact that we are very thoughtful in every decision that we make in developing these communities,” Laurie said. “We’re very strategic. We’re very data oriented and analytical. We do a lot of research to understand where we build, who our buyers are, what the city desires and what the neighborhood needs. We are incredibly passionate about what we do as a company, and look forward to our next 30 years.”

New homes on the way

Be the first to know about coming-soon Olson communities, grand openings and homebuyer resources.

The Olson Company is California’s premier builder of affordable new home communities in the state’s most in-demand urban centers. In partnership with cities and other local and state agencies, Olson works to provide multi-tiered solutions to the critical issues of affordable for-sale housing, community redevelopment, transportation and sustainability. Recognized for creating thoughtfully designed communities within reach of California homebuyers, Olson has built more than 11,000 single-family attached, single-family detached, live/work and mixed-use in-town homes across 100 cities since 1988. Headquartered in Seal Beach, California, Olson is the proud recipient of many top customer experience awards including the 2012, 2016, 2017, 2018, 2020, 2021 and 2022 Eliant Homebuyers’ Choice first place awards for Overall Purchase and Ownership Experience.

Homes for sale in Los Angeles

Homes for sale in Orange County

Copyright ©2022 The Olson Company, Olson Homes and In-Town Living, Inc. All rights reserved. All information subject to change. All imagery is representational and does not depict specific building, views or future architectural, community or amenity details. All services, pricing, square footage and bed/bath counts subject to change. Models do not reflect racial or ethnic preference. Not an offer or solicitation to sell real property. Offers to sell real property may only be made and accepted at the welcome center for individual Olson Homes communities. For additional legal disclaimers, please click here. DRE #01877641. CSLB #939166 Olson Urban Housing, L.P.